Riyadh – Well known journalist Qurban Ali expressed his concern over the current situation in India and advised the people to use all the available ways to legally raise their voice against the oppressions. Ali, who filed the PIL against Yati Narsignhanand’s hate speech in the Supreme court which resulted in his arrest, said that filing PILs and FIRs against hate, injustice and oppression is the only solution left for us. Every individual should strive to safeguard the national interest. All the oppressed people and victims of injustice should unite. Large number of PILs and FIRs will surely have some effect. To effectively work in this direction, creating pressure groups is the necessity of time.

Qurban Ali, who has been associated with many journalistic organizations including BBC, asked the NRIs to raise their voice on social media against any unconstitutional activity or injustice.

Blaming the late Prime Minister Mrs. Indira Gandhi for the existing communal atmosphere in India, he said the seeds of hatred were sown during her second tenure. Being the witness and first journalist to report the Babri Masjid demolition, Ali said that the foundation of this well-planned project was laid down in 1984 when the Masjid was unlocked during the regime of Rajiv Gandhi. He said that after the Shah Banu case, the amendment in Muslim Personal Law was just a lollypop given to Muslims as the then Prime Minister Rajiv Gandhi opened the lock of Babri Masjid the very next day. In other words, the foundation of the construction of ram temple was laid on that occasion. From operation blue star to communal riots in various parts of India, the atmosphere of communal hatred was flared up by congress during its rule and BJP is getting the benefits now. 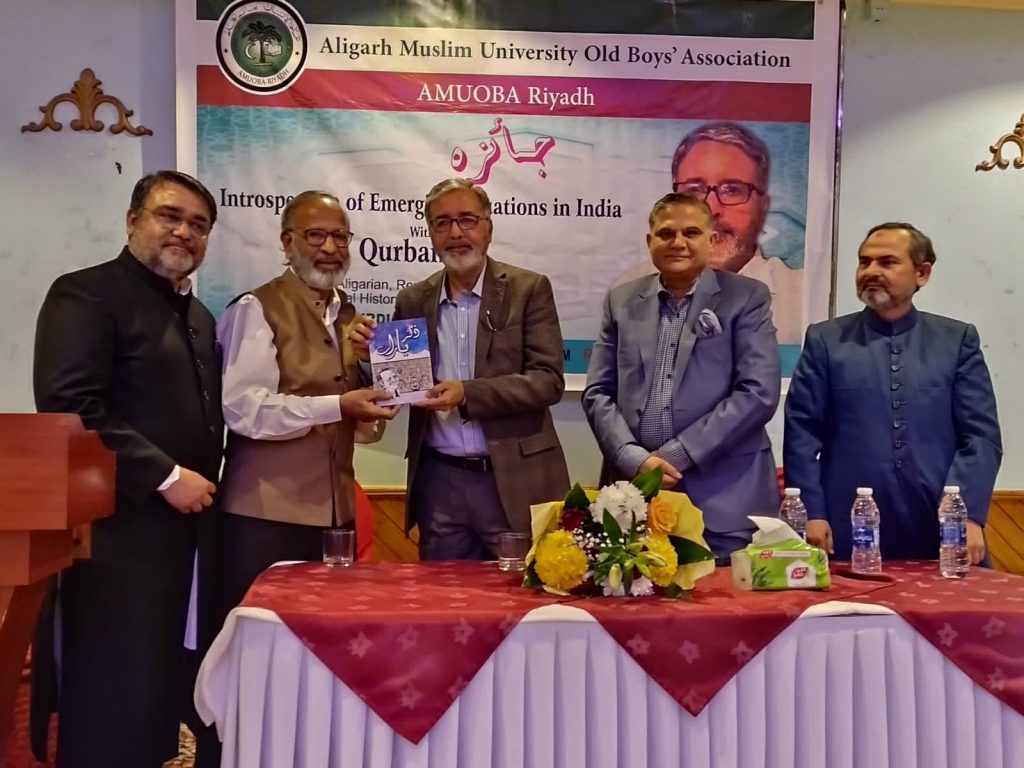 The fearless journalist Qurban Ali, who filed a PIL against organizing dharam sansad and the provocative statements of genocide against Muslims in it, said these activities are putting the dignity of the country at stake. These jibes also negate the ethos justice and equality promised in the constitution

He said that de facto Hindu nation has already been formed as the communal forces successfully implemented their “blatant majoritarian communal agenda”. The country got the freedom after the efforts of people from all the communities. It is an undeniable fact that the first war of independence was led by Mughal emperor Bahadur Shah Zafar while the last and final war was fought under the leadership of Mahatma Gandhi.

He said the freedom struggle was fought on the basis of establishing a secular and democratic country. This is also the soul of our constitution mentioned in the preamble. But without any amendment in it, de facto Hindu Rashtra has been established.

Expressing his views on the current situation of India Qurban Ali said that the people’s minds are corrupted with the views that they are taking the revenge of 800 years rule. Many people, including highly educated individuals are getting influenced with this. That is the reason why the ruling party is winning elections with thumping majority.

The meeting started with the recitation of the Holy Quran by Dr. Abdul Ahad. After the opening remarks of Taqiuddin Mir, President AMUOBA Abrar Hussain welcomed the audience. Senior Correspondent Arab News, Rashid Hasan gave a detailed introduction of Qurban Ali and termed him as a truthful and fearless journalist.

On this occasion, Abrar Hussain along with AMOUBA team presented a commemorative moment to Qurban Ali. Taqiuddin Mir performed anchored the event as Master of Ceremony (MC). The event concluded with the vote of thanks by Vice President AMOUBA Najamul Hasan.