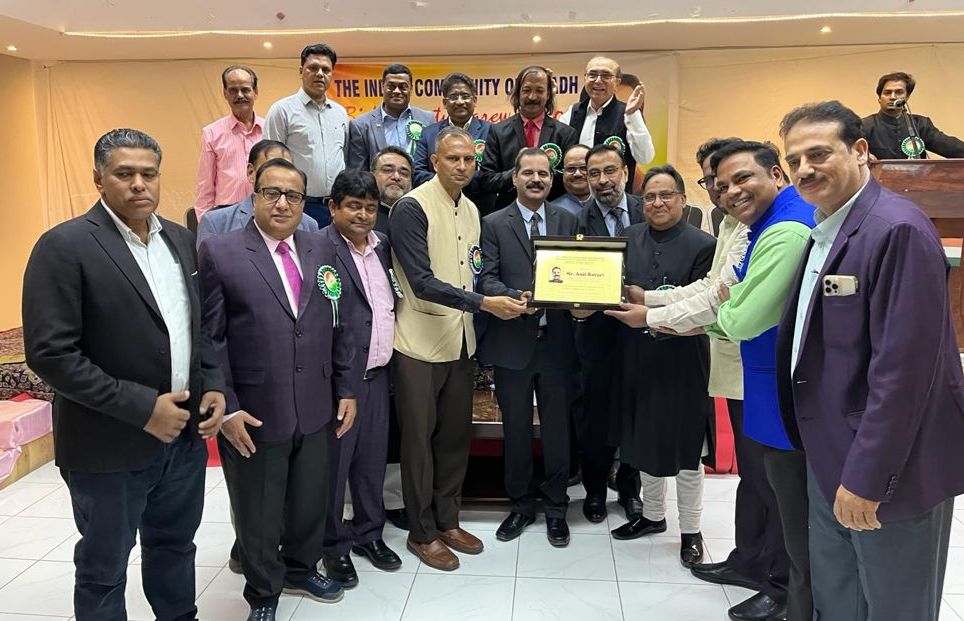 Anil Raturi is one of the popular diplomats among the Indian community. Being an in charge of death registration and issuing death certificates at the community welfare section, his services can be termed as LIC’s famous slogan “zindagi ke saath bhi zindagi ke baad bhi”. For all the death cases of Indians, the necessary documentation for repatriation or burial of the body are issued by him.

Anil Raturi completed his three-year term in Riyadh and now he will move to Osaka in Japan as Deputy Consul General.

Extending his gratitude for an impressive farewell Raturi thanked all the community leaders. He appreciated the services of Indian community leaders. He shared some of his experiences during the corona period and termed it as the toughest period of his career. Indians being the largest community in Saudi Arabia, embassy officials faced a lot of challenges and difficulties. “Due to the travel restrictions and ban on transporting the death bodies, it was very difficult for us to convince the grieving family members for last rites in Saudi Arabia. Many family members were pleading to transport the bodies back home. It was very challenging to convince them.”

Citing another challenging situation, Raturi said that due to the lock down cheques of compensation issued by Indian mission struck up in various post offices and got lapsed before reaching its destination. Assessing the situation, Indian Embassy re-issued more than one thousand cheques and sent again to the family members of the dead.

Charge De Affairs, Mr. N Ram Prasad appreciated Anil for his dedicated and impressive services to the community during his tenure.

A commemorative memento was presented to Anil Raturi by the community.

Large number of community leaders presented shawls and bouquets to Anil Raturi. On this occasion the wife of Anil Raturi, Mrs. Minu Raturi and his daughter Ms. Vasundhara Raturi were also felicitated.

Marghoub Mohsin conducted the proceedings as MC while Abdul Ahad Siddiqui delivered vote of thanks. The event started with the recitation of the verses of holy Quran by Mohammed Shams.