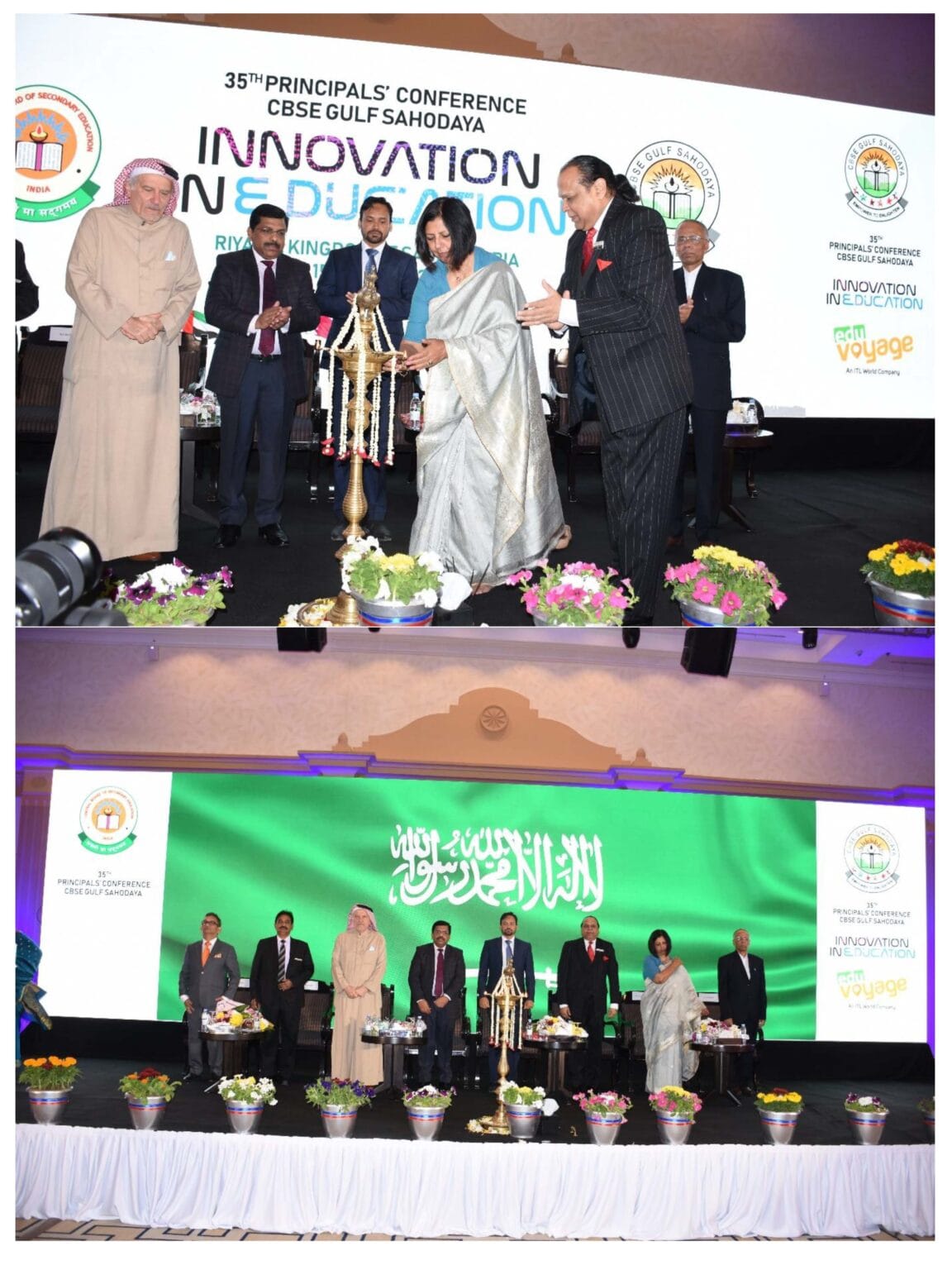 Riyadh – The 35th conference of CBSE School principals was organized by CBSE Gulf Sahodaya in Riyadh. 193 principals of CBSE affiliated schools of GCC countries attended the two-day event held at the Mariott Hotel on 14th and 15th January. The delegates also included the officials of CBSE, New Delhi, prominent educationalists, and publishers of India.

The day one began with an inaugural session with the welcome address by Mrs. Shabana Parveen, Principal Modern Middle East International School. The dignitaries were escorted by the delegates and the head boys and girls of the various schools of the Riyadh zone. They honored the dignitaries with a floral welcome.

The dignitaries formally inaugurated the conference by lighting the lamp. This was followed by a welcome address by Chairman, Gulf Sahodaya Mr. Mairaj Mohammad Khan, Principal DPS. Mr. Moin Akhtar, Counsellor, Embassy of India, Riyadh addressed the gathering and emphasized on the need for high priority for imparting quality education in the CBSE affiliated schools.

Mr. Khalid Al Maeena a Veteran Saudi Journalist mesmerized the audience with his thought-provoking insights into the Indian education system combined with a sneak peek into the historical Gulf Arab relations. Dr. Joseph Emmanuel, CBSE Director Of Academics enriched the session by stressing the need for maintaining integrity to the inherent values of the education system.

It was a marvellous beginning of the first session by Dr. Joseph Emmanuel. He emphasized on the major focus areas in the school education system and reiterated the need of pedagogy to be modem, inclusive and engaging. He also focused his audience’s attention on the need to transform the assessment system and also stressed the importance of introducing a competency focused assessment.

An extraordinarily impressive and interactive session was held by Mr. Rahul Kapoor, one of the leading motivational speakers of India which was a combination of psychology and science which left the audience applauding

The third session was held by Mrs. Rama Sharma, Director of Public Relation & Media, CBSE. She focused on the importance of mental health of students. Mrs. Sharma focused the attention of her audience on identifying the mental health issues at an earlier stage of student’s life. She also emphasized upon positive parenting, creating awareness and providing support to the students in schools.

The day one of the conference concluded on a musical note as the delegates regaled to a melodious night by music maestro Ustad Shujath Husain Khan at the auditorium of the Embassy of India, Riyadh.

The second day of the conference commenced with an eye opener session by a team of IT experts lead by Mr. Swapnil Kumar who gave an insight into coding, Al and Robotics. Mr. Swapnil discussed the current challenges faced by teachers and schools in imparting digital education to students and suggested various methods of overcoming those with the help of Al learning for 21st century students.

The second speaker of this session was Dr. Faizan Mustafa, academic and constitutional expert and former Vice Chancellor of NALSAR University of Law, Hyderabad. Dr. Faizan gave an in-depth explanation of the need for ethics in the current education system. He also discussed the New Education Policy in detail and consequently tagging it as a “Farsighted and Futuristic” policy. The ultimate aim of education, said Dr. Faizan, is to develop individuals of great character.

Another speaker for the morning was Mr. Shaik Shibily, from Edu voyage who highlighted the importance of travel and educational trips which enrich a student’s experience of learning. The fifth session for the day began with Dr. Terence who discussed the fourth Industrial Revolution. He emphasized the urgent need to prepare a curriculum for students facing the fourth Industrial Revolution. He presented a solution as a combination of cyber-physical systems which would empower the students. He also emphasized upon the reduction of cognitive load. He also stressed the importance of students having a global mindset.