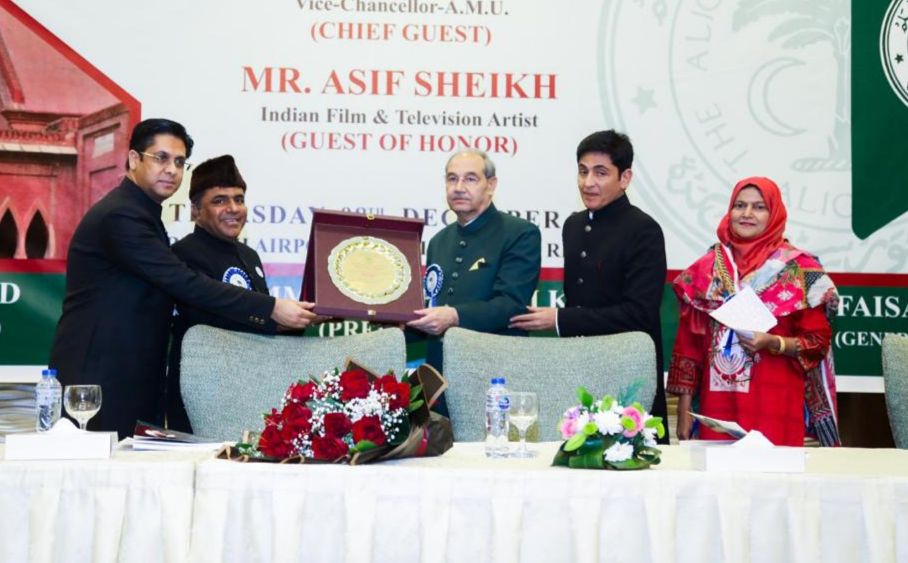 Addressing the gathering as chief guest, the Vice Chancellor further said the university is striving hard to keep abreast with the latest trends in education. During his tenure the university introduced 40 new courses which includes highly in-demand latest courses like Artificial Intelligence, Robotics, Data Science etc., he added.

The function held at Airport Marriott Hotel was attended by prominent members of the Alig community in Riyadh.

Prof. Tariq Mansoor invited all the alumni to visit the well facilitated AMU campus during their next visit to India.

Famous Bollywood and TV Actor of ‘Bhabiji Ghar mein hain’ fame, Asif Shaikh was the Guest of Honor. He expressed his gratitude to the association and appreciated the impressive alumni culture spread all over the world.

President of AMUOBA Riyadh highlighted Sir Syed Ahmed khan’s mission and urged the alumni to join hands and unitedly work for education which is the only tools for the development of community as well as the country. He also reminded the basic ideology of Sir Syed which is modern education, moral teachings and scientific knowledge.

For the first time university tarana was presented by ladies and gents alumni together. First lady vice President of the organization Mrs. Samina Masood delivered vote thanks.

President, Mohammad Arshad Ali khan presented memento to the Vice Chancellor to express his gratitude for his presence and exemplary contribution in the development of university.

Souvenir “The Alig Fraternity” was released on the Occasion compiled by the Editorial team lead by Mr. Saad Bin Mohammed, Treasurer of the Association.