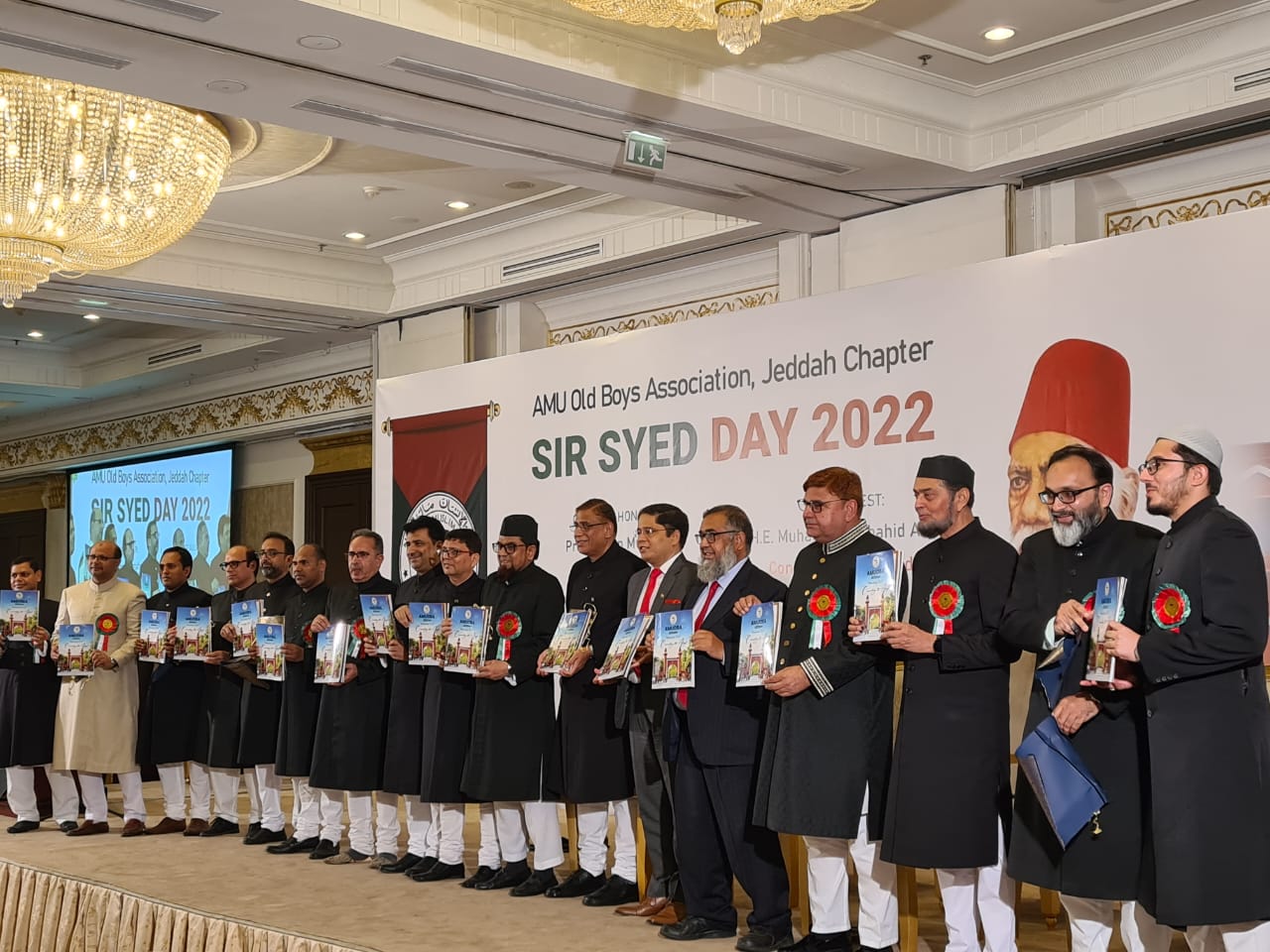 JEDDAH — The Aligarh Muslim University Old Boys Association (AMOUBA), Jeddah, celebrated the birth anniversary of its founder Sir Syed Ahmad Khan with traditional zeal and fervour on Friday, attended by around 400 alumni and their families.
The event began with the recitation of the Holy Quran by Fahad Zinjani. Arshad Saeed was nominated to preside over the event, being the senior most Alig.
In his report, AMUOBA General Secretary Prince Ziaul Hasan Mufti highlighted the achievements of the executive committee carried out in past year. He thanked Aligarh fraternity of the Western region for their support to the social causes.
AMUOBA President Ateeq Siddiqui welcomed the Guests and recalled the vision of Sir Syed and his sacrifices.
The 1857 revolt was one of the turning points in Syed Ahmed’s life. He clearly foresaw the imperative need for the Muslims to acquire proficiency in the English language and modern sciences.
Therefore, he worked with a missionary zeal to set up Mohammedan Anglo-Oriental (MAO) College, which later became Aligarh Muslim University (AMU), Ateeq concluded his address by saying ,
Uth, ke Ab Bazme jehan ka aur hi Andaaz hai,
Mashreq wa Maghrib mien Tere Dor Ka Agaaz hai
Guest of honour & keynote speaker was Prof. Faizaan Mustafa ,Former Vice Chancellor of Nalsar University of Law, Hyderabad. He praised the vision of Sir Syed who recognized the role of education in the empowerment of backward Muslim community. He provided a modern & progressive institution MAO college as Muslims were not comfortable in sending their children to Govt schools.
He emphasized that the Indian citizens & specially Muslims should be aware of their rights and avail themselves of the liberties provided to them in the constitution as minorities, to conserve their language, religion & culture and they can establish & administer the educational institutions for this. MAO college was established on same principles, which resulted later in formation of AMU he added.
He highlighted role of Sir Syed, who provided a very efficient & transparent system of Governance for MAO college , which can be a role model for our Muslim institutions.
He reminded that the vision of Sir Syed remains incomplete, as we could not become Cordoba or Havard of the East as Antony MacDonnell predicted, but we hope the ‘Aligarh of future’ will achieve it.
Faizan Mustafa concluded by saying,
Yahan milta rahega soz saze Arzoo barso
Kiya he khoone dil se ek qalandar ne wazoo barson.
Consul General Shahid Alam appreciated AMUOBA Jeddah for always supporting consulate team in all their community work. He has attended AMUOBA events several times & always look forward to such occasion where he can meet Indian people he said.
Sir Syed was an educationist, social reformer, modern thinker, and today we should see if we are building upon his spirit of empowering the community & country and serve humanity he added.
As per the tradition, executive committee presented the dignitaries with the mementos on behalf Amuoba to pay their respect. Amuoba’s Advisor & past president Nooruddin khan also distributed the gift hampers to the guests.
A directory cum souvenir, “Connecting the Aligs”, was released by the chief guest. Aqeel Jamil, introduced his directory team which included Rabnawaz Khan, Nayyer Mumtaz, Prince Ziaul Hasan, Athar Rasool & Gufran Nashtar .
A slide show, prepared by Rabnawaz Khan, was shown, highlighting the activities and achievements of AMOUBA carried out last year, showing their active involvement in organizing a host of social, religious, charitable and educational projects.
A skit was staged on the theme Sir Syed’s Modern Education . The play was conceptualized and written by the President Ateeq Siddiqui, Directed by Ms. Lubainah Ateeq and performed by small kids , including Ayaan , Hamid, Ibrahim, Yassira , Madiha,. Nuwaira , Manal.
Excitement and enthusiasm were witnessed among the audience when an engaging & digital quiz competition on the topics of AMU & Sir Syed was conducted by Asim Zeeshan. The winners were awarded gift hampers.
A raffle draw was conducted by Nayyer Mumtaz, Gufran Nishtar and Athar Rasool, where prizes were given to the lucky winners. The sponsors of the directory were called upon to give away the gifts.
Vote of thanks was proposed by Vice President Mohammed Siraj. The program was anchored by General Secretary Prince Ziaul Hasan Mufti in Urdu, adding flavour and splendour to the event.
The audience was enthralled when Ateeq Siddiqui and his team echoed the venue with a beautiful rendition of the university anthem “Tarana”. The program ended on high note with a sumptuous dinner.