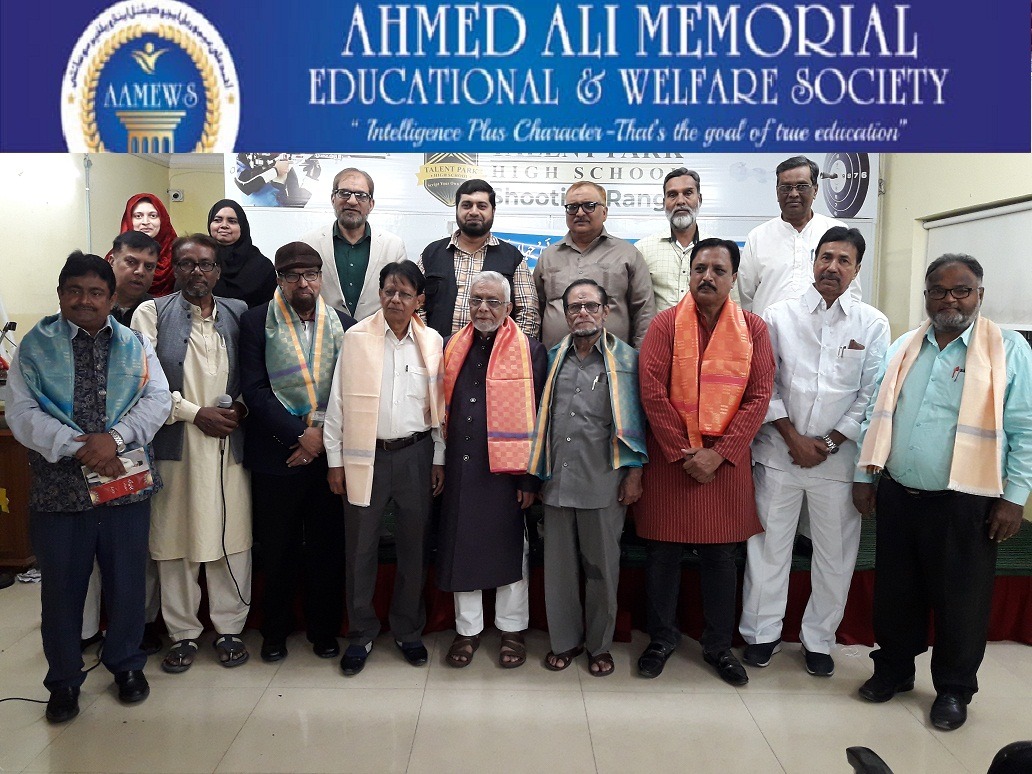 “Adabi Ijlas & Mushaira are the part of Urdu Literature and organize to promote the Urdu Language, there should be a campaign to save Urdu Medium Schools in Telangana State”, said the Chief Guests while addressing the Adabi Ijlaas, Mushaira and Book Release Event organized by Ahmed Ali Memorial Educational Society in Talent Park High School, Aditya Nagar Colony Tolichowki; “Urdu Zariya E Taleem Ya Urdu Bahaisiyath E Mazmoon” was the Topic given for the Adabi Ijlas. Prof Majeed Bedar Former HOD Dept of Urdu Osmania University Presided over the Event, whereas Architect AR Saleem, Dr. S.A. Nouman Former Chairman Urdu Academy AP, Mr. Abdul Jabbar President TNRI Forum & Prof Masood Ahmed attended as Chief Guests; Mr. Syed Ali Hyder Razvi & Dr. Nazim Ali were the Guest Speakers. Dr. Mohammed Asif Ali President Ahmed Ali Memorial Educational Society welcomes the Guests and Poets; he said that the aim of organizing Adabi Ijlas & Mushaira in this part of the city is to connect the different Groups. He assured that such type of events will be inline in future so as to promote the Urdu Language and literature in this part of the City.

Guest Speakers argued that if a University can be established as Medium of Instruction as Urdu, then why can’t we are unable to save the Urdu Medium Schools. These Schools are the foundation pillars which can serve the need of the University too. Chief Guests Architect AR Saleem, Dr. S.A. Nouman Former Chairman Urdu Academy AP, Mr. Abdul Jabbar President TNRI Forum & Prof Masood Ahmad while addressing the gathering urged the Societies, Trust & Anjumans working for the promotion & development of Urdu Language to represent the issue with Government of Telangana so that these schools will remain in working conditions.

There are lot of examples where the alumni of these schools became Doctors, Teachers, Engineers and other Professionals, there should not be a comparison between English, Telugu or other medium of instructions, every medium of instructions have their own advantage. Specifically Architect AR Saleem showed concerns regarding the conditions of Ahle-Urdu, he said that he recently attended GAM 23 Osmania Foundation Global Alumni Meet 2023, wherein Urdu alumni representation is very much poor. Prof Majeed Bedar Former HOD Dept of Urdu Osmania University who presided over the Event said that it’s high time that we should try teaching Urdu Language to our kids from their childhood, because most of the Islamic Literature like Tafseer, Quranic Translations and other text are in Urdu. He also emphasize that Urdu is not the language of only Muslims, it’s the language of Masses, it’s the language which represents all religions of this country.