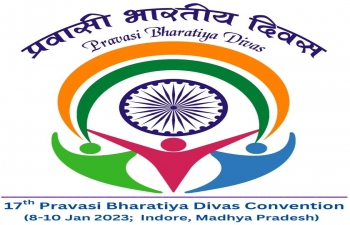 Riyadh – The 17th Pravasi Bharatiya Divas (PBD) Convention will be held from 8 to 10 January 2023 in Indore, Madhya Pradesh. The theme of the convention is “Diaspora: Reliable Partners for India’s Progress in Amrit Kaal”.

PBD is celebrated once in every two years to strengthen the engagement of the overseas Indian community with the Government of India and reconnect them with their roots. During the Convention, selected overseas Indians are also honored with the prestigious Pravasi Bharatiya Samman Award to recognize their contributions to various fields both in India and abroad.

9 January commemorates the return of Mahatma Gandhi from South Africa to India in 1915. To mark this day, the tradition of celebrating Pravasi Bharatiya Divas (PBD) started in 2003. First PBD convention was organised on 9 January 2003 to mark the contribution of the overseas Indian community to the development of India. Since 2015, under a revised format, PBD Convention has been organized once every 2 years.16 PBD conventions have been organized till date. 16th PBD was conducted in a virtual setting with the theme “Contributing to Aatmanirbhar Bharat” in 2021 during the pandemic.

Apart from individual registration, the PBD website has a provision for Group registration where a minimum of 10 members are required to register as a group. Special discounts are available for group registrations. For the Group Registration, Group Coordinator (who is also a member of the group) of the group would Register a group and upload a Group Document. The group document contains the Full Name, Email ID, Phone Number and Passport Number etc. of all the members of the group. For registration, please visit on https://pbdindia.gov.in/registration