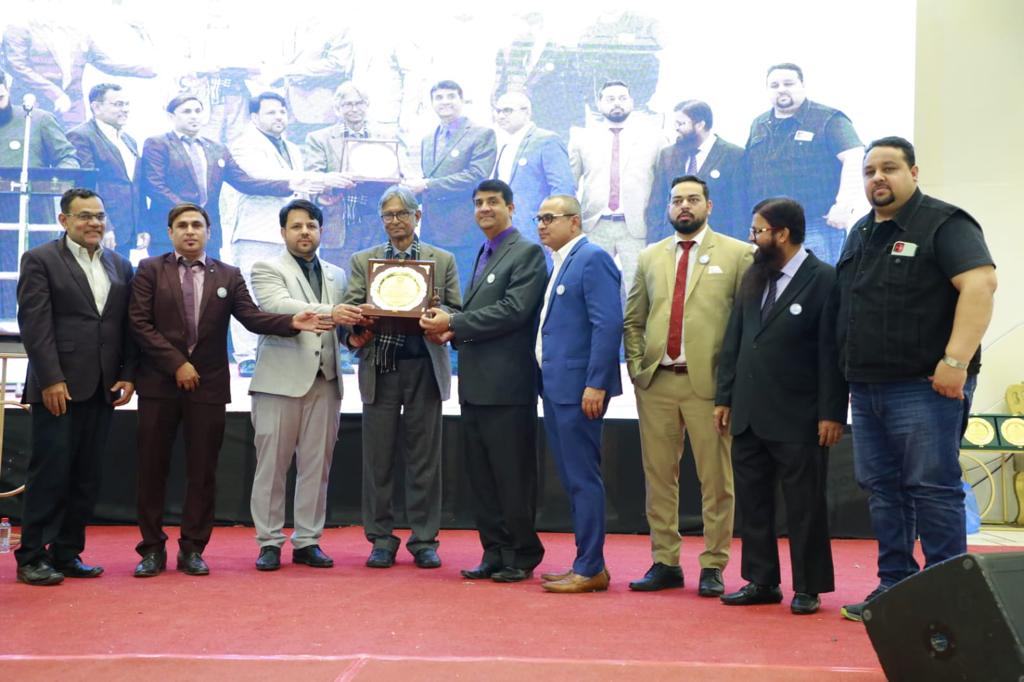 Riyadh – The fun filled and jam packed 102nd foundation day celebration of Jamia Millia Islamia by its alumni in Riyadh was a huge success. On the chilly Friday evening, Jamiaites in Riyadh flocked at Renad Celebration Hall where stand-up comedy, mimicry, poetry and music regaled the audience till late night.

Arranged by the Riyadh chapter of Jamia Millia Islamia Alumni Association (JMIAA), the foundation day of the university witnessed bone-tickling comedy and mimicry by laughter challenge fame Jayvijay Sachan and scintillating poetry by eminent poet A M Turaz which mesmerized the audience. Eng. Aftab Ali from Journalism and Mass Communication department of the university regaled the audience with the famous qawwali “dama dam mast qalandar”. Member of the association in Riyadh and poet Abdulrahman also presented his poetry.

The joy and fun continued till past mid night as the audience were in no mood to wind up the program. Upon request from audience, the stand-up comedian Jayvijay Sachan and Poet A M Turaz were called on mike once again to regale the audience in second round.

On this occasion The Riyadh chapter JMIAA announced that educational awareness and career guidance programs will be conducted more frequently as educational upliftment is its main target. Providing scholarships to the needy students is another focus area of the organization.

In memory of the dedicated services and contributions of an eminent alumnus of Jamia in Riyadh, JMIAA launched Zafar Bari scholarship to help needy and deserving students. Guests and family members of Zafar Bari launched the scholarship. An alumnus of IISR, AMU and Jamia Zafar lived in Riyadh for 22 years and took his last breath in India during his vacation in April last year. To commemorate his dedicated services and contributions, Zafar Bari scholarship has been launched.

In his address chief guest Jamia alumnus, educationalist and MLA Rajasthan Assembly Wajib Ali offered his full support and cooperation to Jamia alumni and their family members. In addition to being a Congress MLA in Rajasthan, he also runs four colleges in different cities of Australia. He said that anyone can reach him for guidance about higher studies in Australia. Even though he runs business in Australia, he contested elections in Rajasthan to serve the community and raise the voice of the community.

Guest of honor, Chairman Wadia Institute of Himalayan Geology, former Vice Chancellor of Jamia Millia Islamia and Kashmir University, Prof. Talat Ahmed recalled his association with JMIAA Riyadh chapter and disclosed that as a VC of Jamia Millia he attended the first alumni meet in Riyadh and then alumni functions followed in other places. He supported the advice to conduct more programs on education and awareness. He appreciated the activities of the chapter and applauded the announcement of scholarship. He said that such scholarship is the necessity of time as many boys and girls face lot of difficulties in paying the fee.

On this occasion, Jamia alumni members were felicitated who are working at the Indian Embassy in Riyadh. On behalf of the embassy staff Mohammed Shahabuddin thanked JMIAA Riyadh chapter and said that it’s our duty to serve the community. He stressed on the necessity to create awareness among youth in Riyadh about various schemes offered by the Indian government.

Secretary JMIAA Riyadh Chapter Shaik Azharuddin presented the report on the activities of the association during the last two years. Corona pandemic was the most challenging period and we strived to reach out needy jamiaites. He disclosed that the association also sent ventilators to India. “We also supported the CAA NRC protest at Jamia”, he added.

On this occasion all the previous presidents were honored by presenting mementoes.

At the beginning anthem of Jamia was sung by a troop of alumni and their children. While the program ended with national anthems of India and Saudi Arabia.

“Witnessed out national anthem playing in Riyadh, Saudi Arabia after the last set of my performance yesterday. I can’t explain my feelings. I had tears in my eyes seeing all my Arabic people and Indian brothers standing straight and showing their respect for our country.”